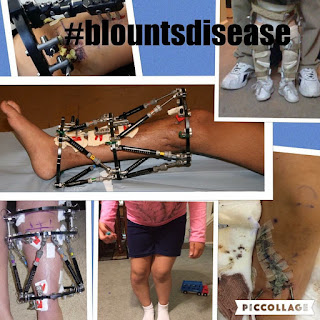 Blount disease is a growth disorder that affects the bones of the lower leg, causing them to bow outward. It can affect people at any time during the growing process, but it’s more common in kids younger than 4 and in teens. The exact cause of this rare condition in unknown; however, a variety of hereditary and genetic factors are likely involved.
In Blount disease, a lot of pressure is put on the growth plate at the top of the tibia. This is called the physis and it’s made out of cartilage, which is weaker than bone. The job of the physis is to allow the bone to lengthen and grow.
But this excess pressure prevents the bone from growing normally. Instead, the lateral (outer) side of the tibia keeps growing but the medial (inner) side of the bone does not. This uneven bone growth causes the tibia to bend outward instead of grow straight.
Blount disease is very different from the bowlegs that babies and toddlers have. Their legs are naturally bowed and usually straighten out when they start walking. But with Blount disease — whether it starts in early childhood or the teen years — the curve gets worse if it’s not treated. So early diagnosis is very important.

What Are the Symptoms?

The most obvious sign a person might have Blount disease is bowing of the leg below the knee. In young kids this is usually not painful, but for teens it can be accompanied by knee pains (it may feel like a growing pain in the knee area). The pain may come and go. Most teens have already been taking over-the-counter pain relievers for it by the time they see a doctor.
It can cause other problems, too, mainly due to the way the lower leg bears the weight of the body. The tibia can be rotated as well as bowed, causing a condition called in-toeing (when the feet point inward instead of straight out).
Over time (usually decades), Blount disease can lead to arthritis of the knee joint and trouble walking. One leg may also become slightly shorter than the other.

How Is it Treated?

How Doctors treat Blount disease depends on how old the person is and how far the disease has progressed. Young kids may simply need to wear leg braces. Most older kids and teens will need surgery.
Many different types of surgeries can correct Blount disease — some involve cutting the tibia, realigning it, and holding it in place with a plate and screws (this is called an osteotomy); some involve removing the damaged growth plate; and some use a device called an external fixator to hold the bones in place from the outside. If a person’s toes turn in, surgeons may correct the twist that’s causing that, too.
If surgery is necessary, it will be done under general anesthesia (you will be completely asleep and not feel anything). Afterward, you might wear a cast and use crutches for a while. You’ll also probably need physical therapy.
Other Names for Blount's Disease 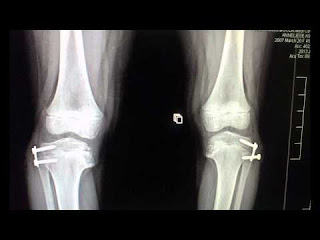